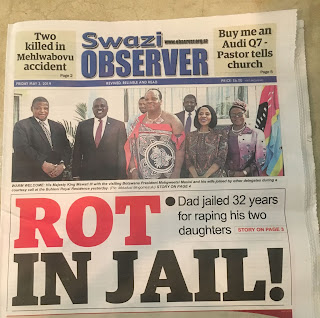 Not much surprises me anymore, but this week I heard a story this week that took my breath away, and I want to share it with you so that you can see the heart of this ministry and why we are here.

There was a young teenage girl who was living in a typical Swazi homestead with her mother, her Grandmother and her Step Grandfather.  Recently the mother of the girl noticed that the teenager was pregnant and the mother was very angry and ashamed. She immediately took the girl to have an abortion (which is illegal here) and the girl was given pills to abort the fetus.  Hours later the baby arrived, and was alive.  The woman who gave them the pills told them to not worry about it, just leave the baby alone and she will die.  So they did.

We don’t know where in the homestead that they lay the 6-pound baby (obviously close to full term) for five days, but we do know that she lay there, waiting to die, until neighbors started asking questions.  The questions led the family to take the newborn to a nearby clinic to be checked out, and they began providing minimal care.  The story is a bit cloudy from here, but two weeks after the baby was born the police raided the homestead after the case was reported to them, finding the baby, the mother and the alleged father … the Step-Grandfather!

El Roi, the God who sees, saw this little baby and He has a plan for her life.

I was looking at some statistics that we are preparing at the request of the Deputy Prime Minister.  With the VERY limited information that we have on the 228 children who have been placed with us through the Social Welfare Department, we know that 17 of them are a direct product of rape. We know that 32 of them came from young teenagers and we know that 32 babies came from women who were severely mentally and/or physically disabled.  It is not a stretch to assume that most of the young teenage pregnancies were due to a payment of food/clothing/school fees (which means they did it because they were in need,  which constitutes rape) and it’s not a stretch to assume that the 32 mentally disabled women did not knowingly consent to having sex.  We have NO idea of the history of the babies who came to us from pit latrines, found on the side of the road or found hanging in a plastic bag in a tree, so they are not included in these numbers.

The government passed our first ever Sexual Offence and Domestic Violence Act in August 2018 (SODV) and I am told that many men in the nation our outraged and believe that the country will be destroyed by this new law that makes rape a crime.

The front of yesterday’s newspaper is not shocking to anyone living in eSwatini because it is so common.  It is called Tibi Tendlu and it is “sweeping under the mat” the knowledge that incest is happening in the homestead.  We hear about it every, single, day.  This father was raping his own two daughters, but this time it was reported and he was tried and found guilty and given 32 years in prison.

While men will continue to abuse girls/women, and most won’t get caught or prosecuted, I am thankful that we do have a law that brings us closer to protecting the women of this country, and imprisoning those who are found guilty. And I am also thankful for the knowledge that El Roi, the God who sees, is the final Judge and He also sees those men, and they will stand before the throne of God one day and answer for their actions.

For now, our role is to provide a safe haven for babies who are in need and to raise them with a hope for their future. Will you please sponsor one of our children today so that we can continue to say “yes” when we are called and asked to help a baby in need?  Thank you for joining our growing family.

Live from eSwatini … trusting in the God who sees.

Janine
Posted by Janine Maxwell at Saturday, May 04, 2019