Why do baby boys get dumped more than baby girls?

Good question?  And the simple answer is that I don’t know, but it’s something that has been on my mind.

As a former marketer (well, as they say, once a marketer always a marketer) I was always looking at behaviors and trends and wondering what they meant at that time and how they would impact future behaviors and trends.  When we kept getting three boys for every one girl at the El Roi Home for Abandoned Babies I started to ask myself why, and then I started asking my Swazi friends, family and healthcare professionals for their input.  Is it just a coincidence or maybe just what we were seeing?

When I asked one of our caregivers, her response was instant. She said, “girls are valuable because they can get Lobola for a girl when she gets married.  She is worth money to the family”. Lobola is “payment” that the groom makes to the brides family when he wants to marry her.  Payment is made with cows here in Swaziland. I found the comment interesting because girls/women really are not valued at all in many African cultures (except for their ability to bring the family cattle, or goats, depending on the country you live in).  They are beasts of burden and are responsible for most of the work around the home including building the home out of sticks/rocks/mud.

Did you know that 75% of all food that is planted, grown, harvested and cooked on the continent of Africa is done so by women?  Could it be that girl babies are kept because they will generate future income for the family?

I had a very different conversation with a group of labor and delivery nurses.  They said that boys are dumped because they think a mother finds it is easier to bond with a girl.  They also tip toed around the fact that a mother might feel that she needs to protect the girl child (as she was not protected) and that the boy child may grow up to be an abuser (the way she was abused by a man).  Wow.  Could the human psyche really think that way?  Could a mother in labor or having given birth to a child really make a conscious decision to keep a girl and toss away a boy?  I know it happens in reverse in other parts of the world, but I am still confused by it all.

That being said, the fact is that since March 1, 2012 we have received 17 babies, and 12 of them are boys.  Only five are girls. Why?  I don’t know, but I do know that the Creator of the Universe knows and we will gladly accept any baby He sends to us for care.  In fact Friday morning (Swaziland time) Ian, Helen and Shirley made another trek to Siteki to pick up two more newborn babies.  The first one is the one whom I have blogged about before (born in a dry pit latrine resulting in multiple head injuries).  The second is the one I received a call about just as I was getting on a plane to go to Taiwan on Tuesday.  Another boy.  Another pit latrine, but this one “fortunately” (!?) was filled with human waste so his head injuries weren’t as bad as the one who fell in the toilet with no human feces in it. I can’t really believe I just typed that sentence. But there it is.

So we now have 17 beautiful babies at the El Roi Home for Abandoned babies and we have beautiful and loving caregivers, Aunties and a Gogo who care for them  knowing each and every one is a special gift from God.  For those of you who read this blog faithfully and who pray for us and the babies at the El Roi home regularly, today I am asking for your financial help and I don’t do this often.  We cannot care for more babies if we don’t get more friends like you to support us on a monthly basis.  Getting medical care, proper diet, lots of loving caregivers and all the other things that go in to these precious children costs money and we cannot bring in any more babies without further assistance.  Will you consider making a monthly commitment today?  In the US please click here.  In Canada, please click here. 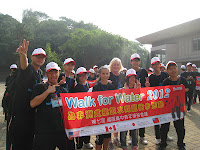 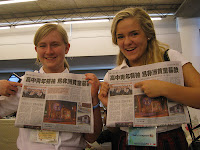 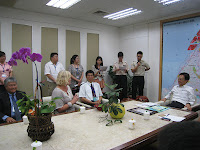 This week’s blog is being written in Taiwan, not Swaziland. I am here at the invitation of Mr. Lewis Lu who is hosting in conjunction with the 2nd Annual 100 KM Walk for Water in conjunction with the 7th Annual Youth Leadership Conference.  This is a national fundraising campaign to raise funds for the many water needs we have on Project Canaan.  Students from all over the world are participating, including Heart for Africa representatives from the US, Lawson Bishop and Emily Livingston.   I am thankful to have the opportunity to walk with the students, meet with political and business leaders and speak to students at schools to share the great need in the Kingdom of Swaziland. Water is life and we have 17 new lives on Project Canaan that require water to live and learn. Our friends here in Taiwan are committed to helping us help the children and for that we are very thankful.  This is my fifth trip to Taiwan in five years and I look forward to see what the Lord is doing in this country.  Next week I speak at MingDao University (agriculture) and spend a few days with my friends at the Morrison Academy. I look forward to the days ahead.

Live from Taiwan …  it’s Saturday morning and I love my job.