On October 5th we will celebrate our 25th wedding anniversary, and what a wild and crazy 25 years it has been!  For the past six months we have been planning a fun-filled trip back to the US and Canada to celebrate with friends and family.

But alas, our dogs decided that they really wanted us to stay here instead and due to a fluke accident last week, our anniversary trip has been cancelled.  Here is what happened.

Ian was letting out the “big dogs” which are locked up in a large pen during the day and let out to roam within our electric fencing at night.  They keep snakes and wild animals away, and Swazi’s are TERRIFIED of them. One of our female Boerboel’s (named Tai) loves to horseplay with our male Doberman named Max.  Each of them weighs 130+ pounds.

Ian opened their gate and out they rushed.  Unfortunately the two rambunctious dogs took an unusual path down to the house and ran in to Ian’s left knee and he dropped to the ground.  I got a phone call from Ian, and he said was, “I need help.”  I ran out in to the darkness to see him lying on the ground waving his flashlight in the air so I could see where he was. He was writhing in pain and the dogs were standing over him, licking him (and feeling VERY badly!!).

Kenny came to the rescue and helped Ian get down to the house and in to bed, with ice, Advil and prayer following. On Ian’s 51st birthday he went and saw an orthopedic surgeon in Swaziland who drained 4 oz of blood off the knee and told him to take it easy.  Three days later, while wearing a brace, Ian’s knee twisted while in the house and down he went, cracking a rib and further damaging his knee.

On Tuesday we were sent to South Africa to see a knee specialist to have an MRI and make sure that he would be okay to make the 17-hour flight on Friday and start our anniversary trip.  The specialist saw us first thing Wednesday morning and by 3PM that day Ian was in surgery (in a city we don’t know in an African country). 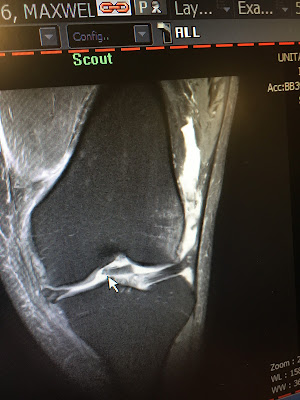 It appears that when the dogs hit the outside of his knee, the knee cap pushed over the other side of this tibia and a chunk of his knee cap was knocked off before the knee cap slid partially back in to position. The ruptured ligaments allowed blood to pool under his kneecap and keep it out of position.  The bone chunk (the size of a quarter) slid down the front of his kneecap and lodged in between his tibia and his femur.  OUCH! 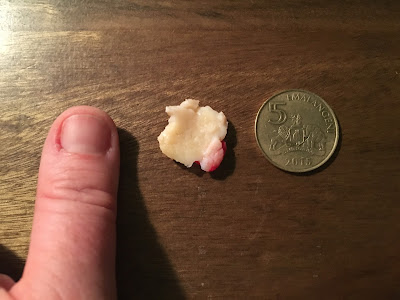 We drove half way back to Swaziland Thursday afternoon and made the call to cancel our trip. Last night (Friday) were to have driven 5-hours back to Johannesburg and then gotten on a plane to fly to the US for three weeks that would not have been filled with pain, frustration and unnecessary stress,. 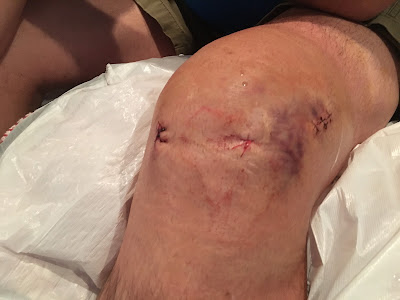 So many people have sent us kind words of encouragement and support, and we really appreciate that. Both Spencer and Chloe have called several times to check on their dad and tell us that they fully support us cancelling our trip, and that warms my heart (and helps slow the tears).   In each call we remind each other that it could have been much worse.  We are not dealing with a poisonous snakebite, deadly PCP pneumonia, Multiple Drug resistant tuberculosis or many of the other things we deal with each and every day. This is an inconvenience (and obviously painful for Ian), not a crisis.

It’s an inconvenience because I needed oral surgery to fix a tooth that has been broken for months.  I need to see my ophthalmologist to get an updated prescription because I am almost out of contact lenses.  Then there is our ““buy in the US/Canada” list of things that we can’t buy here that will go un-purchased, and Christmas gifts will need to be purchased in other ways.

But it is an inconvenience, it’s not the end of the world.

Of course the hardest part is that we won’t be able to spend time with Spencer and Chloe, who we only see together once a year (at Christmas). We will miss Ian’s dad’s 80th birthday party and Canadian Thanksgiving.  We have cancelled our 25th anniversary party where most of our wedding party was going to gather again and we would have had delicious food and a few good laughs with lifetime friends. But that is life.  Serving in Africa ain’t for sissies, and but we are thankful to have the opportunity to do it, even with the bumps and bruises along the way.

Today I have peace. I haven’t slept much in the last two weeks, but got a solid nine hours in our own bed last night.  Ian is in a brace on the couch watching Diners Drive-In’s and Dives and is comfortable. There is homemade chili cooking in the crockpot and the laundry is almost complete.  Life is good, and I am thankful.

Live from Swaziland … livin’ the dream.

Janine
Posted by Janine Maxwell at Saturday, September 24, 2016 No comments:

Ian had a bad birthday 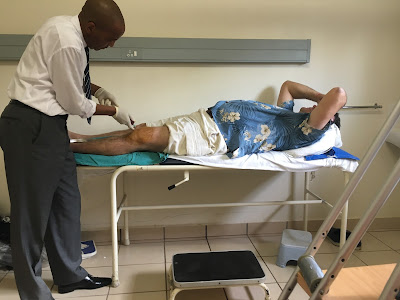 September 15th was Ian’s birthday.  It was also babies Robert, Bernice and Moses’ birthday and they all shared a GIANT cake and celebrated with 39 of their brothers and sisters. 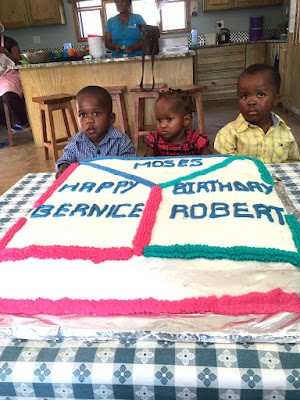 September 15th was also my mom’s birthday (baby Bernice was named after my mom because they shared the same birthday), but there was no Skype call or chocolate dipped strawberries delivered this year since she passed away in February.

September 15th should have included cake for Baby Megan, but again, that was not to be as she passed away last month, and was buried on Project Canaan.

Ian’s birthday celebration was an epic fail. It kind of snuck up on me to be perfectly honest.  On September 13th, Ian was letting the big dogs out of their dog pen and two of them (120+ pounds each) ran in to him on the side, dislocated his knee.  He dropped to the ground writhing in pain and then called 911 (me) for help.  Once I found him on the ground (waving his flashlight in the air so I could find him), I called 911 (Kenny VanWinkle) and he came to our rescue and helped Ian get home.

For Ian’s 51st birthday he got to go to the orthopedic surgeon and have 4 oz of blood drained off his knee and a cortisone shot. We did some grocery shopping, picked up KFC (I can’t believe I am even telling you that) for dinner and then I realized that I also forgot to buy him a gift or bake him his favorite Angel food cake.   To make it worse, we were late getting back to the farm and completely missed the birthday celebration with Moses, Bernice and Robert.

The birthday party was over and even dinner was finished by the time we got back to Project Canaan, but we stopped in to the toddler home to at least give the kids a birthday hug.  Unbeknownst to me our wonderful “Nutrition team” baked Ian a beautiful chocolate birthday cake, in the shape of a heart, and on it was written “Happy birthday Daddy Ian”.  Ohhhhhhh, be still my heart!

Friday was a better “birthday day” and we celebrated with our friends Chris and John, and the Angel Food cake made it to the table. 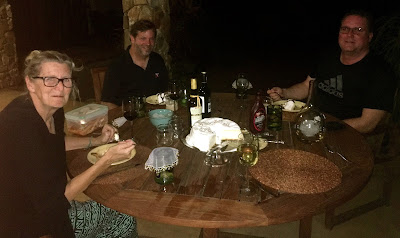 I am so thankful for my husband Ian and the man that he has become.  On October 5th we will celebrate 25 years of marriage – what a wild 25 years this has been.

Happy birthday Ian! I love you. 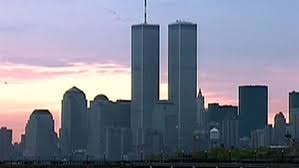 Fifteen years ago on September 11th, 2001 the world changed forever and so did my life.  Most of you likely know that I was in NYC on that fateful day, Ian was on a flight to Chicago, Spencer and Chloe were at school in Canada… and the planes crashed into the twin towers.

Time stood still while everything changed.

Fifteen years later I can safely say first and foremost that I am a follower of Jesus.  Ian and I are living in Swaziland, while Spencer is finishing University in the US and Chloe is in second year University in Canada.  We are the legal guardians of 138 Swazi children under the age of 6-years, with a new baby arriving on an average of every seven days this year.

Fifteen years later I have put on weight, see more grey hair every month and am not quite as fit as I used to be, but I sleep very well at night, I no longer suffer from stress headaches and I am okay looking in the mirror.

Fifteen years ago today I was out clubbing in New York City with my clients from Kellogg’s Canada.  We were bar hopping in The Village enjoying the nightlife, not knowing that the world would change in the morning.  Tonight I will sit on the patio of my house looking out over our 2,500 acre farm in the tiny Kingdom of Swaziland, Africa, knowing that tomorrow morning I will hear the voices of 86 children between the ages of 3-years-old and 5.5-years-old singing songs of joy, of hope, of love and of peace. 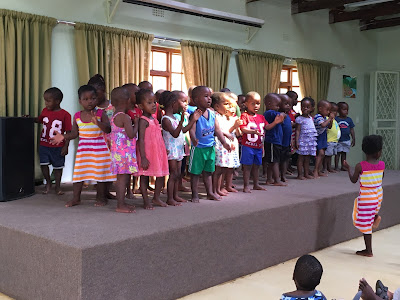 A lot can happen in fifteen years, and I am a living, breathing testament to what can happen when fear, pain, selfishness and greed are turned to joy, hope, love and peace.

This has been a long hard journey, but I wouldn't change a single step of it.  I have tears (again) pouring down my cheeks as I type this because today fifteen years ago seems like yesterday.  When I hear people on the news talk about 911 it is still as raw to me as it was fifteen years ago.  But then I look up and see where I am, and my peace is restored.

Thank you for allowing me to share so much of my journey with you over these past few years and thank you for your love and support.   Jesus always restores my joy when I have dark day and he brings me hope when things seem hopeless.  Of all the lessons I have learned, I am most thankful for the knowledge that He is always with me.  Always.