Earlier this week I got a call about a 10-month old baby who needed a home.  The mother suffered Placential Abruption prior to giving birth and an emergency C-Section was performed, but not until the child was without oxygen for some time. As soon as the baby was born everyone knew that things weren’t just as they should be.  The baby scored a 2 on her Apgar test and the mother had immediate concerns, but a good piece of news was that the baby tested negative for HIV, even though the mother was positive.

When the father of the baby came to see her he said he did not want the child because she was disabled.  The baby struggled to suck because she had a severe cleft palate, but the mother was patient and worked hard to get breast milk in to her tiny mouth.  Sadly, we learned that the baby has since contracted HIV from the mother’s breast milk and is now HIV positive.  The mother had no alternative for feeding  because she was poor, alone and uneducated. She is 23- years old and only finished first grade. She cannot read or write, but she loved that baby that God had given her.

As the child grew the disabilities became more pronounced and the Grandmother started to yell and call the baby an “animal”.  A few weeks ago she kicked the mother and baby out of the house saying that someone had put a curse on the family and the baby was proof of that curse (a very common belief of a disabled child in Swazi culture).  The Grandmother said that the mother must kill the baby, and then she could come back and live at home.  But this young mother loved the baby with all her heart and couldn’t kill the child. The mother and baby went from house to house looking for a place to stay, but with no job and no way to support herself it was difficult. Finally a Social Worker from a local hospital offered to help.  She took the two in and helped get a medical assessment of the baby done by a neurologist.

The CT scan was shocking. Half of the baby’s brain was “black” on the scan.  The baby has severe Cerebral Palsy, Epilepsy, blindness (not total), deafness (not total) and a severe cleft palate.  Both eye cross (one at a time) with seemingly no muscle to control them.  She struggles to swallow and is always choking and coughing saliva that has gone down the “wrong pipe”. The baby cries from morning to night.

On Friday I took Gcebile Shongwe (one of our Senior Supervisors at the baby home) and Brooke Sleeper (our Nurse Practitioner extra-ordinare) to the Social Welfare office to meet this young mother and the baby. It was a heart-breaking meeting and everyone in the room was making a case (aka getting ready to beg) for us to take the baby.  I am not going to lie. I was VERY nervous about us taking the child.  Not only do we not have the expertise needed in this area (not that the mother did either), but with the baby having so many problems and being HIV positive I was very nervous about her life span.  Lord?  What do we do?

I stopped the conversation about health and asked the mother what she wanted?  As tears welled up in her eyes and started to pour down her face she held her baby closer and told us that she loves the baby. She does not want to give the baby away, but she just doesn’t know how to care for her and help her live.  She was angry when she talked about how her own mother had kicked her out of the house and how the father of the child (AND his family) had shunned her and the baby.  It was heart-breaking and heart-warming all at the same time.

The solution suddenly became crystal clear.  I pulled the Social Welfare officer out of the room to present a possible plan.  She almost cried and said, “YES!  This is the best plan!”  Just then Brooke came out the door with the baby’s heath card and pointed at a box where you list what birth order this child came in.  Brooke said, “There is another child.  A 5-year old.”

We went back inside and asked the mother about the other child.  Sure enough, there was a 5-year old girl who had been given away to the neighbors when the baby and mother had been kicked out of the house.

For the next 30-minutes we talked about Project Canaan – A place of Hope.  We told her about the “Sicalo Lesisha Kibbutz” and the women who were living in five of the six rooms that had been built.  I cannot tell you how happy and relieved I was to know that we still had one room open at the women’s center.  I knew at that moment that this family was to come and live on Project Canaan and that we could help.  We invited her to come and live at the Kibbutz with her baby and that way we could help her as best we can with the medical appointments and healthcare, but she would still care for and love her own child. That is the best way.  She cried and told us she would love to come, but she had two questions.  The first question was if she could bring her other child?  Our answer was, “Of course!”

The second question was, “When can we go?”

We loaded up my car and headed off to her homestead.  We arrived to a tirade of obscenities being yelled her mother about the “animal” (referring to the baby) who had cursed the house.  We quickly packed up a small suitcase with all of her worldly belongings, sent for the 5-year old girl to come from the neighbors, jumped in the car and headed home.

I called the ladies who live at the Sicalo Lesisha Kibbutz and told them what was going on.  I usually seek their council before bringing a new person, but time was of the essence so I called them while we were driving. I briefly explained the situation and they said, “Bring them to us!  We will pray for the baby and welcome them all.”

And so we did. 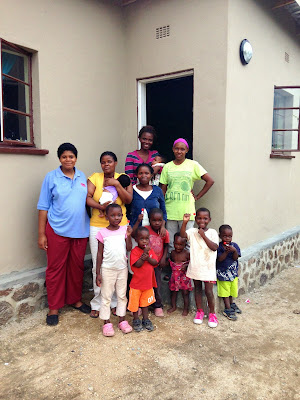 Anthony went and got a brand new bed out of storage that had been purchased for Room #6.  We gathered sheets and new blankets and a bible (even though she cannot read).   We stopped and bought food and a bag of candy for the new girl to share with the children who lived there (instant friendship J).  It was a joyous day and I was so thankful that we had a solution that kept mother and child (children) together.

Live from Swaziland … doing for "one" what I wish I could do for many.

PS – in the middle of the visit to the mothers homestead I was given a goat by a Swazi.  It was a birthday gift to me from a friend who is thankful for what we do.  When we picked up the goat, and put her in the back of my car, we learned she was pregnant!  So we traveled 2-hours with 4 adults, 2 children and a pregnant goat.  The baby didn't cry, but the goat sounded like a baby! 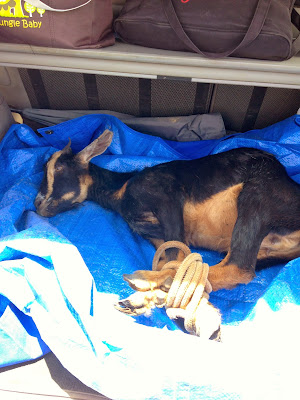 
“I live on a farm in Africa.” – Meryl Streep, Out of Africa

We live on a farm in Africa too and every day is a new adventure.

I have intentionally added lots of photos in this blog because a picture is worth a thousand words and maybe you sometimes think I just make things up. Nope, the photos, which you are about to see, really were taken here at Project Canaan.

The rains have finally started to fall and the storms have been crazy.  With the rain has come golf ball sized hail, massive flooding of the river (3 feet higher than the bridge we have to cross) and our dam is up at least 12 feet and full to overflowing – literally.  Lightening has taken down trees, knocked out power around the country and struck our electrical cable buried in the ground.  This was not an easy fix.  It required a couple of guys to dig a trench 100 feet long, by 3 feet deep until they found the burned cable.  Meanwhile, the things in our freezer have thawed for the third time in several weeks. We have been charging laptops and phones in the car and going to be early, in the dark.

I can’t help but reread my last paragraph and laugh (or cry).  Most people here in Swaziland don’t have a car to drive across the bridge.  They don’t have electricity to be knocked out by lightening and they sure don’t have freezers full of “extra food” to thaw without power.  They don’t have laptops to charge and no car to charge their phones with.  They have roofs with holes that let the water pour in. They have walls made of mud that wash away in the torrential rain.  They have maize flour that gets wet in the rain and turns moldy in a few short days. They go to bed every night when it is dark, because it is dark.  At times I seem to feel “entitled” to my frustration about losing electricity for days at a time, when I know that I should be giving thanks for all of those things that I have to make my life more convenient and comfortable. I am ashamed for being angry about losing them for a short time.

In addition to weather we have seen strange creatures on our patio including a giant slug almost as big as my Size 10 sandal and a red frog, who I am told is trying to mate by sticking its tongue out to catch small insects and attract a female.  The good thing to see  this week were the turkeys who are fattening up on the farm getting ready for “you know what”.  Shhhh, we haven’t told them about the big day.

The highlight of the week was picking up Baby Lenah (she is #47) from her 17-year old orphan mother.  Both of her parents died of HIV related illnesses.  Lenah is 3-months old and named after her 80-year old Grandmother who begged us to take the baby because the teenage mother was not caring for her at all.  The baby is HIV negative and is a healthy, happy baby. 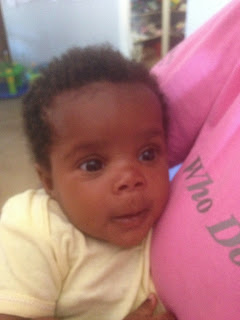 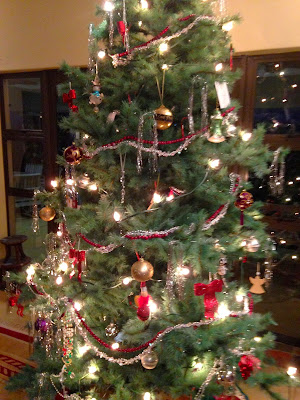 Live from Swaziland … I have nothing to complain about.

Janine
Posted by Janine Maxwell at Saturday, December 07, 2013 No comments: