The colors of Swaziland 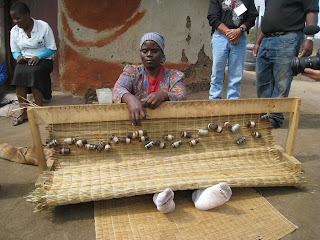 I am sitting half way up one of the hillsides that overlooks the fields at Project Canaan.  Beside me are a series of stakes in the ground with red and while plastic string wrapped around each one to show the exterior outline of our soon-to-be-home in Swaziland.
It’s a grey and dreary day, but no rain yet.  Soon the rains will begin, the crops will be planted and the country will become green again.  But hope doesn’t come with rain or even food anymore in this tiny Kingdom.
I can’t help but be caught in the confusion of the two worlds that collide here.  Although I hate to make this blog about “color”, there seems to be a “black” Swaziland and a “white” Swaziland.  I hope this blog will not be seen as offensive, that is not my intent.  I am simply trying to put on paper (maybe just for my own self-awareness) what I see on a daily basis and the world which my family is about to move in to.
White Swaziland seems to be made up of people with nice (western) homes,  4 wheel drive vehicles, weekly visits to the local Pick’n’Pay grocery store, children in school, dinner parties with friends and family and general talk of the weather when there is nothing else to say.  This is a general observation and does not apply to all.
Black Swaziland seems to made up of  traditional homes built with sticks and mud, once erect and proud, beautifully adorning the Swazi countryside, now crumbling and washing away because the owners have either died or are too old (or young), or sick to care for their homestead.  There are no grocery stores within walking distance, no money to buy food if there was a store and no energy (or seeds or fertilizer) to plant this year’s garden because of poor health and nutrition.  This also is a general observation and does not apply to all.
Many (most) schools are closed now because the government hasn’t paid the 2nd semester school fees for the 1st and 2nd grade orphans of the nation.  You see, in 2010 His Majesty King Mswati III generously offered to pay the school fees for all children in first grade who were orphaned and who had no parent to pay their school fees.  Read this part carefully please:  the country has a population of 950,000 people and His Majesty paid fees for 120,000 orphaned children who needed to go to FIRST grade only.  That means that 12.6% of the total population is approximately age six.   In 2011 he offered to pay for first and second grade fees for orphaned children.  While it is believed that His Majesty has given the funds to the Ministry of Education but they have not passed on those funds to the school level (to pay the teachers for last semester) so, the schools are closed until further notice.
Dinner parties in “black Swaziland”?  The celebrations and gatherings of past generations seem to have gone away as quickly as the food that used to be present at them.  Buthusile Vilakati, a local 43 year-old woman who is caring for 11 children/grandchildren, has been too sick to work so when there is no food to give her children she goes to visit her neighbors and humbly asks if they will share theirs with her family – some dinner party eh?
And weather?  Well, I don’t hear much talk of the weather in  “black Swaziland” because no one seems to have the energy or desire to just make small talk.  Conversations are about things of importance or there is silence.  As a friend once said, “in Swaziland, silence is the loudest sound”.
While color is often a taboo subject to write or talk about, the fact is that my skin is really really white and my hair is blond and I don’t look like most of my new neighbors.  But I know that Jesus loves me just as much as He loves all of the people of Swaziland and the people of the world.  He allowed me to be born in a first world nation and be raised in a family who had a nice apartment, dependable car, a grocery store next door, a (free) school across the street, the occasional pot luck dinner and lots of small talk when there was nothing else important to say.   But was that really better?
“Blessed are the poor in spirit for theirs is the Kingdom of Heaven” Matthew 5:3.
The Message translation of Matthew 5:3 says, “You're blessed when you're at the end of your rope. With less of you there is more of God and his rule.”
It seems that having all the comforts of living in the western world make it hard to be “poor in spirit”.  When we are at the end of our rope we have many distractions to turn to (TV, shopping, entertainment, food, addictions etc).   When someone has nothing but God to rely on is there is a greater opportunity to be less and have Him be more?
I look forward to being Buthusile’s neighbor, not so that I can deliver food to her and treat her as a pet project or charity case, but rather to spend time with her and get to know her as a neighbor.  She weaves beautiful mats out of grass – maybe I can help her sell them?  Maybe I can provide a word of encouragement while helping her fetch water from the river some days.  Maybe I can be the hands and feet of Jesus.  Maybe I can just sit in silence and enjoy the moment when there is nothing important to say.
Pondering in Swaziland.
Janine
Posted by Maxwell's Moving to Africa at Thursday, September 22, 2011 1 comment: Tonight I am siting in a hotel room in Canada after visiting my 80 year old mother in the nursing home or "hell hole" as she prefers to call it.  I had to break the news to mom today that her only daughter (that would be me, Janine), mother of her only two grandchildren (that would be Spencer and Chloe), who moved her family (with her husband Ian) to Alpharetta, Georgia (that would be in the country of the United States of America - out of Canada) was now planning to move to another foreign country (that would be Swaziland) ON A DIFFERENT CONTINENT (and you know where that would be).

Why are we moving?  Because "God asked us to".  When did we start caring about what God wanted?  Shortly after September 11th, 2001... ten years ago this weekend.

It is hard to believe that on night of September 10th, 2001 I was out at a club in the Village in downtown Manhattan with a couple of clients who have never gone clubbing in downtown Manhattan (no, my kids do not read my blog :).  Nothing bad (never did drugs), but loved a good live band and a cool bar scene.  Got in really late (or early on the 11th), had to be a conference by 9AM the next day.  Slept for a short time.  Ordered room service (likely a $25 breakfast) without a thought.  Showered, headed down to the meeting room and then, the world changed forever.

It's now ten years later and certainly a time for reflection.  This year, on September 10th, 2011 I will spend the evening speaking to 300 youth in Effingham, Illinois.  Many of them are followers of Jesus, and (I assume) and many aren't, but all of them were toddlers when the planes crashed from the sky and people jumped from buildings in front of my eyes.  On September 11th I will be speaking at Christ's Church of Effingham to talk about what God has done in my life and how He is using ordinary, everyday people for His glory in Africa - who would have guessed that one ten years ago!?  Not me (or anyone who knew me).

I find it odd that when I think of that fateful day, my mind immediately goes to what I was doing RIGHT before the attacks began.  I was just living my life the way I liked living my life. I was just doing what I liked to do.  Period.  And why not?  I wasn't a bad person.

Ten years later I can't help but see how September 11th changed the trajectory of my life and the lives of my entire family. In approximately 245 days my husband will be working on sustainable farming and economic development on a rural farm in the Kingdom of Swaziland. My son will be heading off to college in America while his family moves to a foreign continent.  My daughter will be enrolled in an international school, in Africa, with students from 180 nations.  And I will become the mother to many... to orphans and widows in distress... to those who need a word of encouragement or a hug (or a kick in the butt).  And my mother?  She will be left in the "hell hole" to keep the staff on their toes and to remind me daily that God loves her as much as He loves the children we will serve in Swaziland and that HE has her in HIS hands, and that I am not to worry (or feel guilty).  NONE of this would have happened if not for the tragic day, ten years ago.

Everything changed on 9/11 and many are still reeling and recovering from the repercussions of that day.  I changed on 9/11 and for that I am thankful.  In the past ten years I have learned that God does not waste anything.  He has taken my life and flipped it upside down.  Would I have embraced this "flip" if I had known about it on September 10th 2001?  NOT a chance.  Now, I wouldn't change it for everything.

"For my thoughts are not your thoughts, neither are your ways my ways," declares the Lord.  Isaiah 55:8

May all honor and glory go to you and you alone.

PS - He makes beautiful things out of dust:  http://www.youtube.com/watch?v=oyPBtExE4W0

Posted by Maxwell's Moving to Africa at Thursday, September 08, 2011 4 comments: