Do we have to say "no" to more babies?

Late Thursday afternoon when Ian and I had just arrived back from Johannesburg (Ian had flown in from a trip to the US) I got a call from a Social Welfare Officer in Mbabane.  She said she had a baby who needed our help and asked if could I drive there right away? Thankfully Kenny and Amber were already in Mbabane and Shongwe was in Manzini so the three of them were able to go and pick up baby #77, who we are calling Moses.

We are told that Moses’ mother died in childbirth (as did his twin) and right after the funeral the father ran away and hasn’t been seen. Moses was left in the hands of his 16-year old sister, who dropped out of school to care for him.  There were three other younger siblings as well and the children were suffering terribly. In fact, Moses was a year old (born on September 15, 2013) and had never tasted milk or formula – he was living on maize flour since birth. 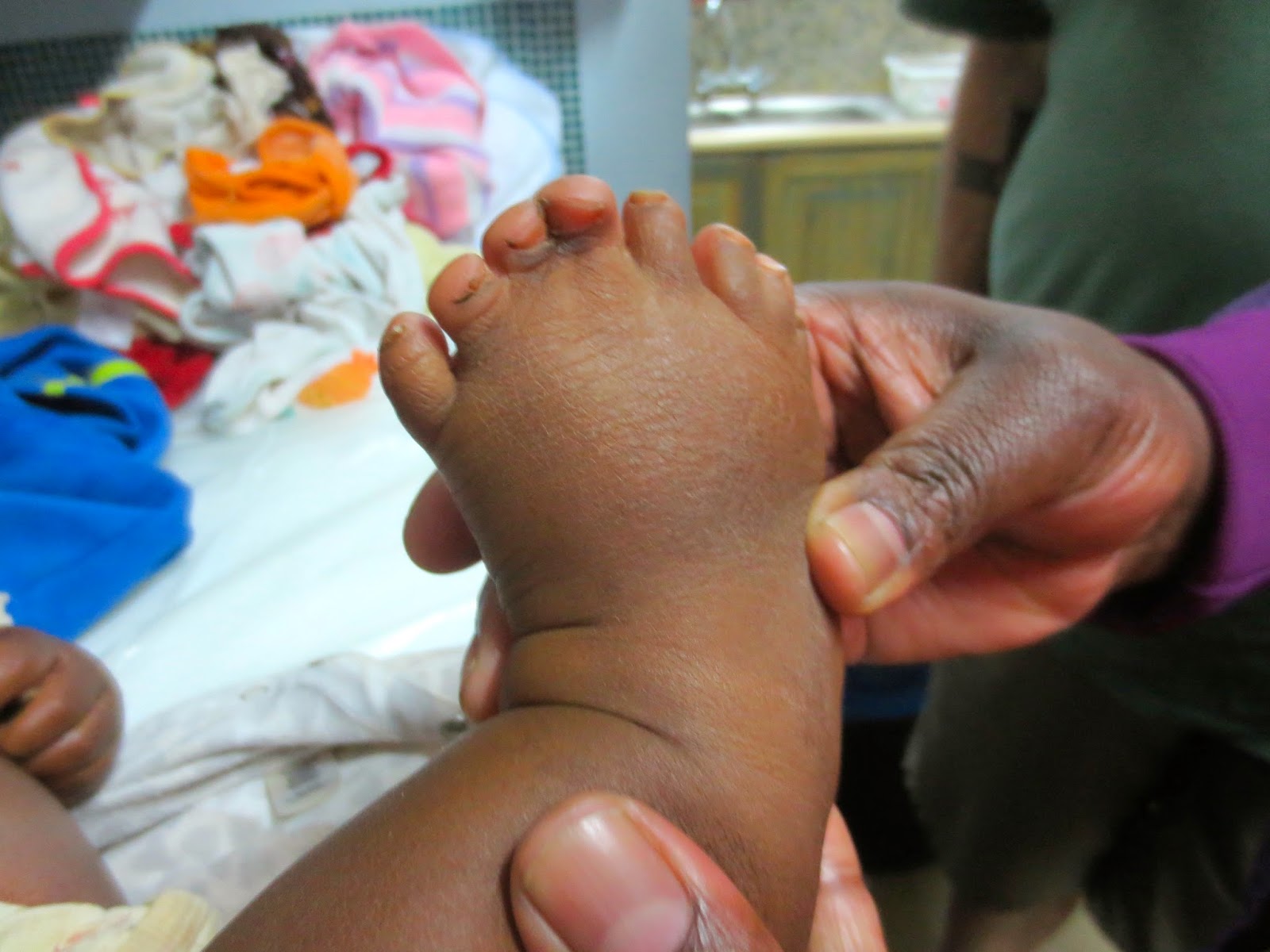 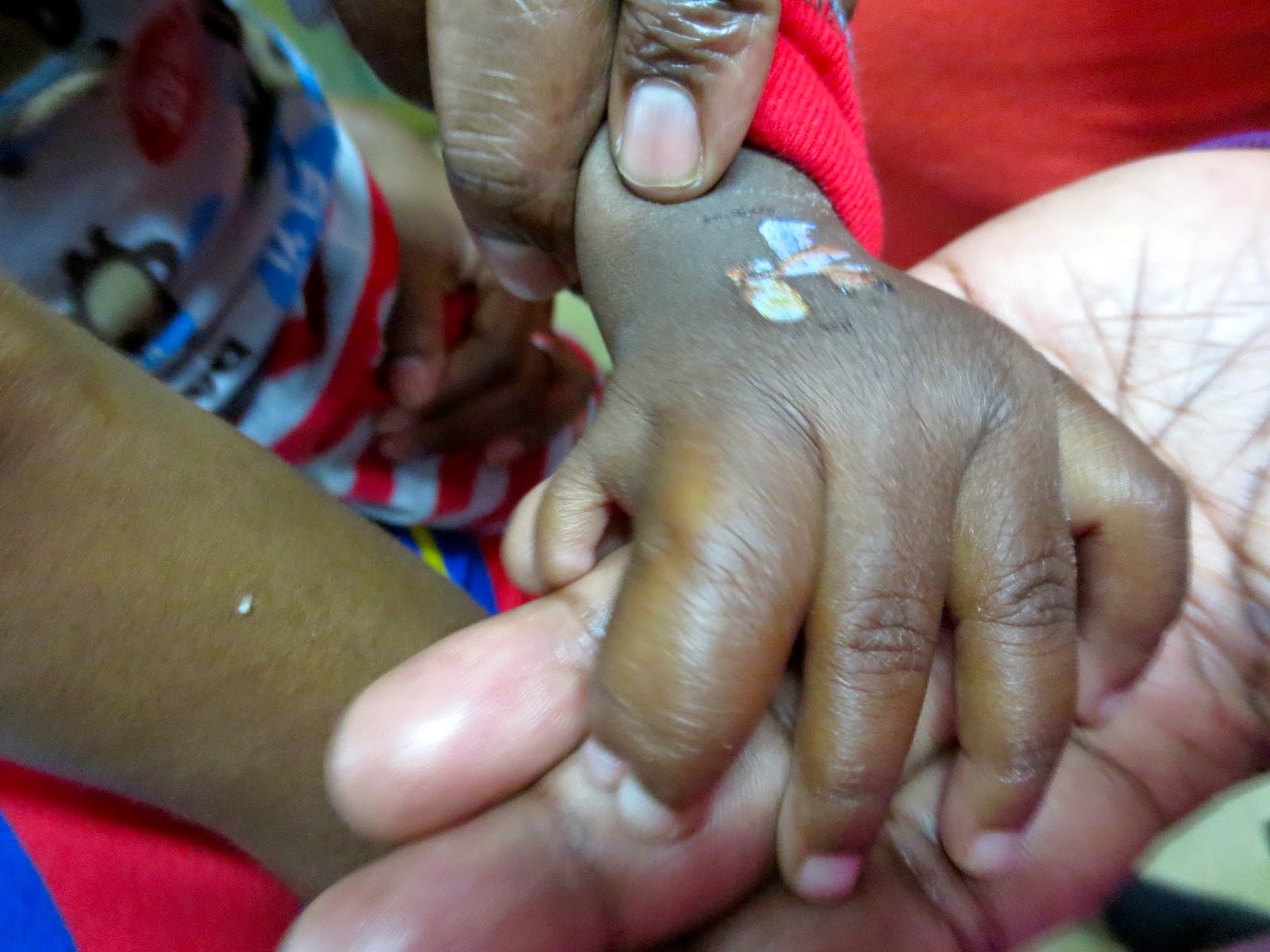 When Moses arrived at El Roi he was given a bath, which is the first thing that is done to get the child clean and give him a quick “look over”.  Imagine our surprise to find that this child has 14 fingers and 16 toes!  None of us had ever seen anything like that before, but alas, we love him just the same and will get council on if and how surgery might be needed.

The next day Ian and I were in town picking up the Egg Farmers of Canada, who flew in to discuss a new partnership with them to help us provide healthy egg protein to the 3,500 Orphans and Vulnerable Children that we feed each through our church partners each week.  During lunch I got a call from a new Social Welfare Officer (in a region we have not worked in before) and she begged me for help.

An hour later I found myself in the Commandant’s office at the Women’s Prison in Swaziland with the four men from the Egg Farmers of Canada.  We heard a story that required true grit to not break down sobbing in the office.

A 21-year old girl sat in front of us holding two babies.  The girl was in prison for the attempted murder of her 6-week old baby girl.  At 11PM on September 11th, 2014 she  gave birth in an outdoor pit latrine/toilet to the baby and went back to bed. At 5AM she went back to see if the baby was dead and heard that the baby was still alive so she went and got a bucket of fire and threw it in on the baby to make sure the baby died.  Her Uncle heard the cries of the newborn and ran to the rescue. When he looked deep down in to the pile of stinking human waste he saw the newborn baby on fire. He quickly grabbed a shovel and threw dirt in on top of the baby to douse the fire.

Both mother and baby went to the local hospital for five weeks and the child is left with significant scarring on her face, arms and legs.

The second child is 16-months old and had a seizure at the age of 6-months leaving her with some paralysis on the left side. But ironically, she ended up in the hospital with her burned sister and received some Physiotherapy and now has much more use of her arm and leg.  The child is severely malnourished and the orange color of her hair is only one indicator of that malnutrition. Both babies came home with us on Friday, wrapped up in the loving arms of our Canadian friends (Peter, Tim, Roger and Scott).  The mother will stay in prison awaiting her trial.  We are calling the small baby Shirley, and the older one Rebecca.

All week we had been in conversations about another baby boy whose mother had been sent to Juvenile Remand by her father, and then found out she was pregnant.  The child was born inside the Juvenile Prison and then handed out the front door to the Grandfather. He did not want, or couldn't care for a newborn so gave the baby to the alleged father from Mozambique.  The father had no means to care for the baby (baby is being treated for HIV because the mother is HIV positive) and we were asked to take the one-month old baby before he was dumped.   We were unable to get to that baby on Friday, so I promised to go back to Manzini on Saturday morning and pick up the baby and the paperwork. 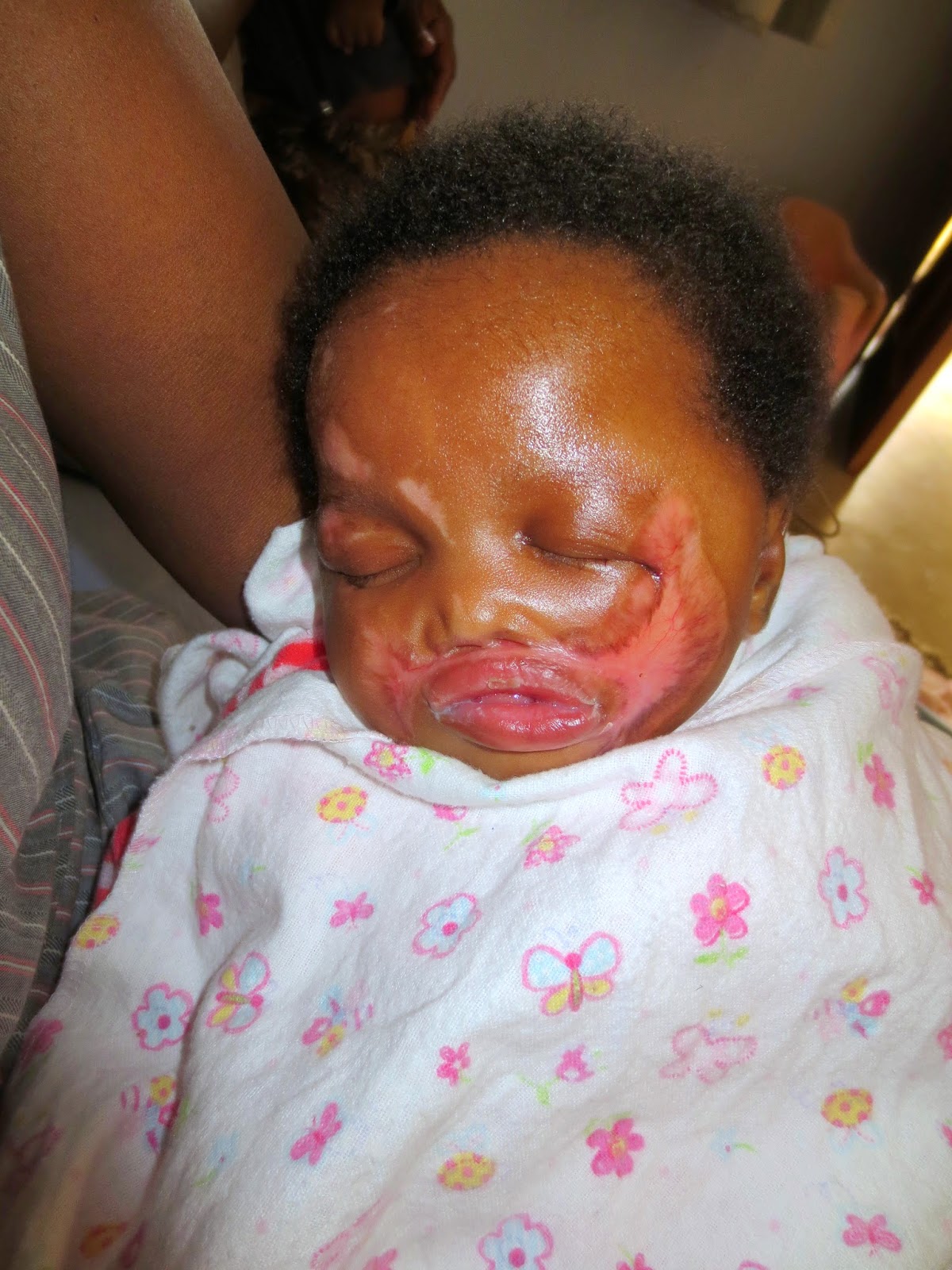 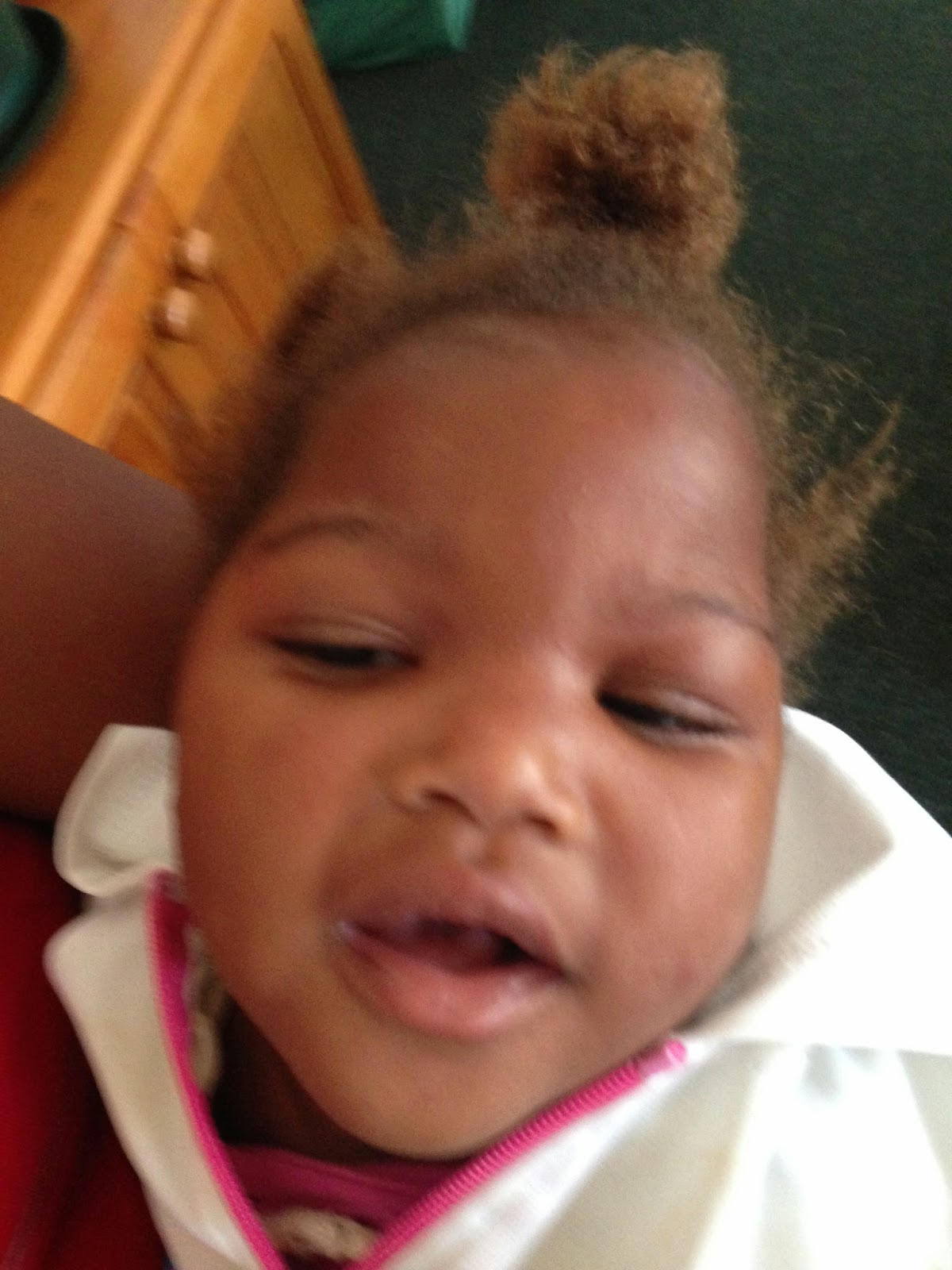 Saturday morning I woke up completely overwhelmed.  Ian and I sat drinking our coffee and realized that today we would receive Baby #80 and that we were MORE THAN FULL at the baby home.  There is still room at the toddler home, but the baby home would have 45 babies in it (built for 20, but then double stacked cribs allowed for 40).  We talked about having to say “no” to the next baby.  Not to mention we do not have the monthly funding for the last 7 babies who have come to us.

I wasn’t sure how I would be able to say “no”, knowing that we might be the only hope that the next baby would have for survival.  I left the house very disturbed and unsettled.

At 8AM I left to pick up Tim and Peter to head to town to get Baby #80.  We NEVER get babies on the weekend because the government offices are closed, so this was a first and an exception to the rule.  As I drove off the farm I received a phone call from the head of the Child Protection Department of the Police.  He said the police had a 1-month old baby boy and the mother of the baby was insane. She was trying to harm the baby and would often leave the baby alone for days.  Could I please go and meet the police and take the baby while they take the mother to the National Psychiatric Hospital?  It as as if God was laughing at me and saying, "I am the only One who gets to say "no".

First we went and picked up the baby we were initially asked to get, whom we are calling Souza, born September 11, 2014. After doing what needed to be done we drove to meet the police at the Psychiatric Hospital. 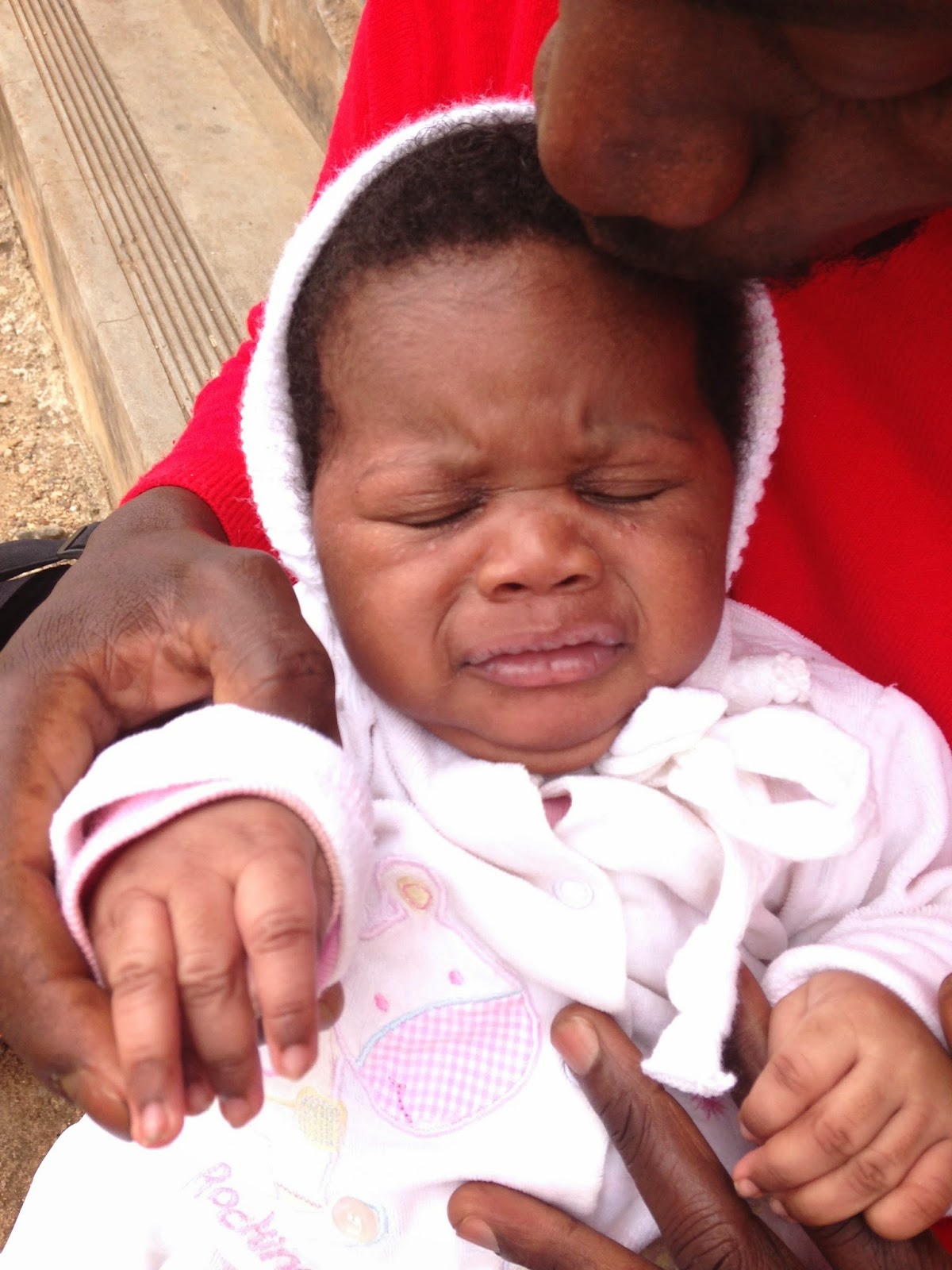 I can’t even begin to describe what the inside of that hospital with 300 patients is like. Lots of screaming, crying, singing, howling and even barking. There was one women who saw Tim and I and starting singing, clapping and calling, “Mommy!  Daddy!”  Then she proceeded to take off all her clothes and dance for us inside her secured room.  (A blog for another day). 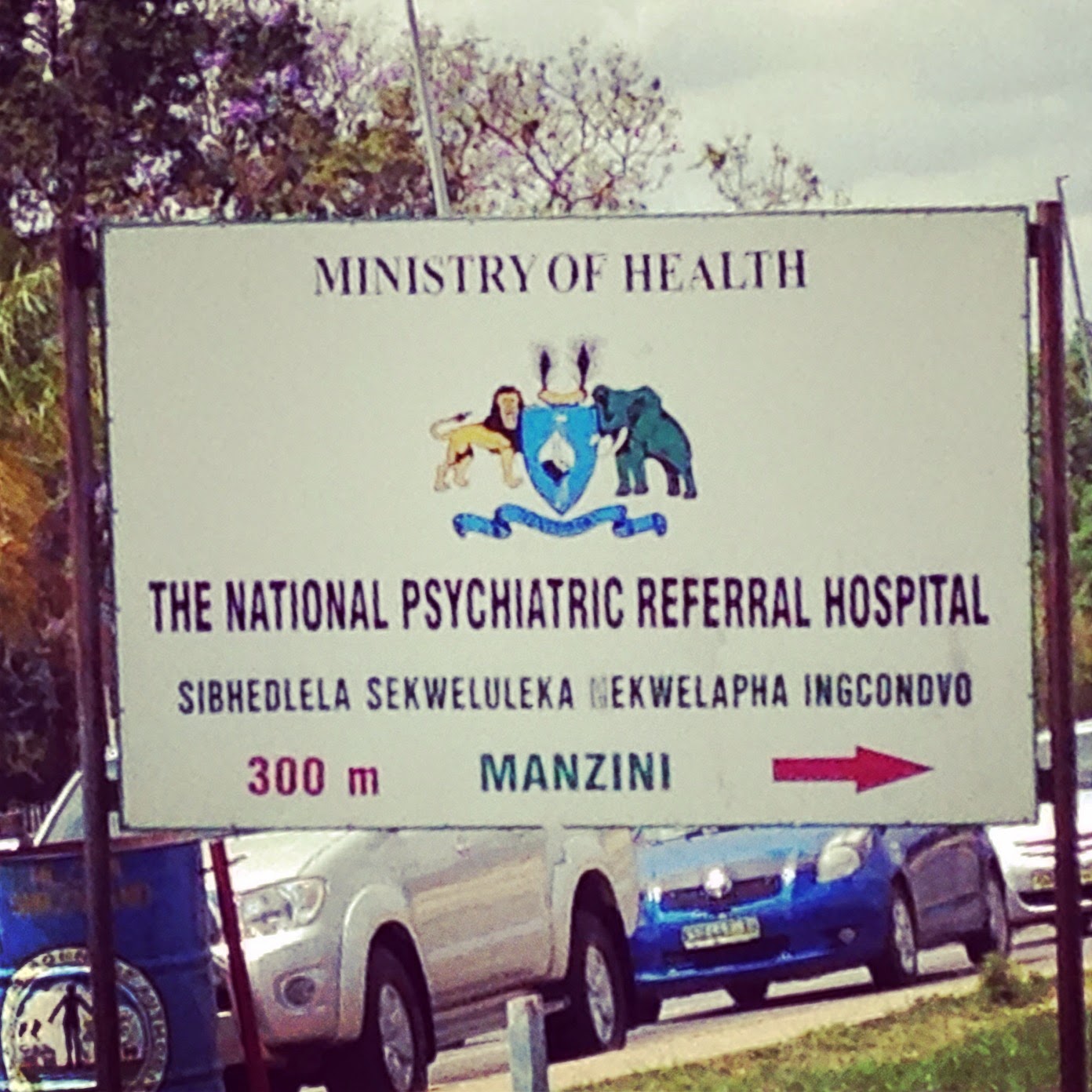 The Police will follow up with the Social Welfare Department, but as of today we are responsible for 81 little lives.  I have no idea how we will pay for them each month, but I believe that the Lord will provide.  I have no idea how we will get medical care for Baby Moses’ hands and feet or for the surgery for Baby Shirley so that she can properly breathe through her burned nose and see correctly out of her left eye, but Jesus knows. And today, overwhelmed and frankly, tired, I leave it at the cross.

We have 38 children in the Toddler home (Daniel and Eve moved up today).  There are 28 living in the baby home and we have moved all 15 “tiny” babies (under 6-months) up to Kuthula Place.    It’s a full and busy place, and we give thanks.

Live from Swaziland … I had to nap before writing this.

If you can help on a monthly basis, please do so.