Nokuphiwa surgery update – things did not go as planned 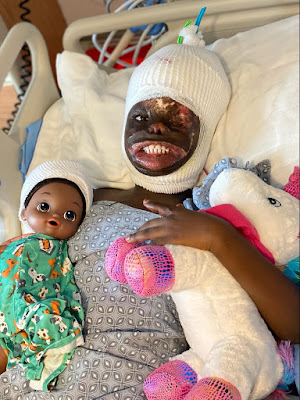 If you don’t know who Nokuphiwa (Phiwa) is please start by reading this blog from just one year ago https://janinemaxwell.blogspot.com/2019/03/nokuphiwa-no-koo-pee-wah.html Phiwa was badly burned when she was only a few days old and did not get any medical intervention until last February when we sent her to Shriners Hospital for Children in Boston under the care of the Global Medical Relief Fund and in to the loving home of our dear friends, the Habelow family.

Phiwa did not have any family who could travel with her so we asked a young lady who had just graduated from University in Eswatini and was working in the front office at Project Canaan to go with her as guardian.  A pretty big ask.  Her name is Nokwanda Fakudze and we had known her for many years and had come to trust and love her.  When I asked Nokwanda if she would be willing to take a young girl, whom she had never met before all this started, to the US for several months of extreme surgical intervention, and she said yes.  None of us had any idea where this journey would take them or the people who have come to know and love them both.

Phiwa’s first few round of surgeries was to take skin grafts from her thighs and release her lips (really, it was to create lips).  Her lips had completely burned off as a newborn which impacted her ability to speak (impossible to enunciate without lips), eat and do other things we take for granted by having lips. Those three surgeries were successful and then she came back to Eswatini.

In November 2019 Nokwanda and Phiwa made their way back to Boston for the second major round of treatment and surgery.  Phiwa has a whole in the front left side of her skull that is the size of a golf ball, in fact you can see her heart beating through the skin.  We all assumed that the doctors would want to fix that first, but we learned that they couldn’t do that because of how taught her skin was, so that is why the lips became the first priority.

In November they put a port in her skull so that each week they could inject fluid that would expand her skin, stretching it so that when they did the cranioplasty the skin could be pulled over top of the hole. (I am writing this in layman’s terms so that you can all follow – surgeons please forgive my simple explanation of a very complex surgery). After three months of head expansion yesterday was the big day for the big surgery!  The plan was to take a half thickness piece of skull from another part of her head and insert it in the hole at the front of her skull.  If I understand correctly, both sites would eventually grow the bone back to full thickness. Once the hole was filled then they would take the expanded skin and stretch it over the left side of her head where she had no hair because of the burns. She would get a new hairline on the left side giving her hair all over her head.  How cool is that?

I think those of us who understood the surgery were nervous about it – it just seems so crazy that surgeons could do such a thing.  But the Lord has protected this child for so long we knew that He would continue to do so.  All of the big kids at Emseni did a video call with the girls the night before surgery and Ian prayed over her for peace, joy and safety. But here's the thing about Phiwa – she is never sad, scared, angry or in a bad mood. Don’t get me wrong, she’s still a kid, and can be stubborn about things, but really, she never complained about her skin expansion, never cried from pain and I often comment that she might not be human.

Yesterday as they went in to the hospital she was skipping and singing (see video below). WHO SKIPS AND SINGS when going to have cranioplasty?  Only Phiwa.

We had a video call with Nokwanda, Phiwa and Eileen as they headed to the hospital and both ladies are so good and sending me updates.  Then I got this one from Eileen:

“Dr. B just came out.  He is very happy with how the skin expansion went.  She now has a hairline that goes all the way to the bad ear and back.  He says there is still a section on the back of her head that needs hair.  That will be a small skin expander next round with which he will finish her scalp and construct an ear.  They did NOT put a new piece of bone in her skull - thought it was too risky during this one.  If the skin replacement leaked it would not allow the bone to heal well enough. He said they added another layer of very healthy skin over it and feels she is protected.  We might get out tomorrow since they did not do the bone.  Check up on Monday and/or Wednesday of next week.  Then, in two weeks or so (I am going to ask for March 25 so I can be here in-person), we will have the consult planning meeting to map out her next year.”

What the heck? They didn’t do the very surgery that we thought she was getting her head expanded for?  I was so disappointed, but Eileen was not, she knows that they would only do what was best for Phiwa.  What I do know is that God’s plans are not our plans, but they are always better, so I will rest in that promise.

May I take this moment to say thank you again to Nokwanda, who really is a Super Woman in my books, and the blanket that she is wearing in the photo below is really her cape. Thank you for your love, your selflessness and your kubeketela.

The girls will come home next month and we will be really excited to have them back.  We will know what the next round of treatment will be after a meeting in a couple of weeks.  We do know that future surgeries include an ear, a nose and hopefully an ocular implant to replace the eye that is sealed shut and non-functional.  Unfortunately, the Habelow’s have moved to Florida, and while they have very generously and graciously kept their apartment rented for the girls to live in during these months, we will need another host home for the next round of surgery. If anyone knows a family or perhaps a retired couple in the Boston area who would be blessed beyond measure to host a very special young gal, who might just be an angel in disguise, please let me know?

Live from Eswatini … thinking about my girls in Boston.