My birth mother was 15 years old when I was born. 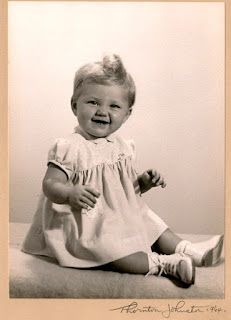 In 1963 a 14-year-old girl made a poor choice and had sex with her 16 year-old boyfriend.  She was afraid, embarrassed and the family was ashamed.  She was immediately sent 400 miles away to a home for unwed mothers where she had excellent pre-natal care, attended school and then gave birth at the age of 15 years.  The baby was put up for adoption, but kept a secret from the rest of the girl’s family and from the community so that the girl and the family could save face.  To this day, the family and the community do not know about that little baby.  That baby was me.

Last Friday we got a call from the Social Welfare department in Swaziland saying that they had found a baby in a ditch and asked if the baby could be accepted at the El Roi Home for abandoned babies.  They said the baby was 3-5 weeks old and needed immediate care.  Of course we said yes.  The baby was taken to the hospital for the weekend to be cared for while an investigation took place and paper work was completed.  On Monday we learned that the police had found the mother.  She was in the 8th grade (likely 13-14 years old) and knowing what is happening in Swaziland I can assume that she didn’t make the choice to have sex, but was more likely forced to have sex (note – I don’t know the facts of this yet, but believe it is a solid assumption).

It is illegal to “dump” a baby in Swaziland and so the young girl/mother was arrested and put in jail.  We are told that her parents (also uncertain of this fact) wanted to keep the baby and so the baby was taken to them.

Since I heard this I have been frustrated, sad, concerned and anxious for the next eight days to pass so that we can get on a plane and go to Swaziland.  Yesterday my dear friend Sandra asked me what I would do if I were there now?  My first answer was “advocate”.  This is not just about the abandoned baby, but it is about this young girl and her future.  I will be there soon and hope to get more information about this particular situation.  How did she become pregnant so young?  What state of fear and hopelessness would bring her to a place where she believed that dumping her baby in a ditch was her best or only choice?  How long will she be in jail?  Will she be allowed to move back home?  Is the baby really safe where it is now?  What does the future hold for this next generation?

When my mother was 15 years old, and pregnant, there was a system in Canada that provided a solution so that I wasn’t aborted or dropped in a ditch and my mother wasn’t put in jail.  I am alive today and my life has a purpose.  But here is the interesting part to me as a follower of Jesus.  Whether we make bad choices or bad things are forced upon us, He can still make things beautiful out of any situation.  I don’t want to see young girls getting pregnant out of wedlock or by force, but I can’t help but be thankful for my mother getting pregnant because I am here today.  Maybe God allowed that to happen SO THAT I would be here today, ready to go and advocate for this young girl and her baby.  I wonder what her baby will grow up to be and what he/she will do?

For you created my inmost being;
you knit me together in my mother’s womb.
I praise you because I am fearfully and wonderfully made;
your works are wonderful, I know that full well.
My frame was not hidden from you
when I was made in the secret place,
when I was woven together in the depths of the earth.
Your eyes saw my unformed body;
all the days ordained for me were written in your book
before one of them came to be.
How precious to me are your thoughts, God!
How vast is the sum of them!
Were I to count them,
they would outnumber the grains of sand —
when I awake, I am still with you.

We get on a plane in eight days and while there are many moving (and complicated) parts in our lives right now, I am thankful that His plans are not our plans and that His plans are perfect. I am thankful that I have been chosen to care for orphans, vulnerable and abandoned children.  I could have been one of them, but instead HE rescued and redeemed me.  Whew!  “Thankful” doesn’t come close to expressing my feelings today.

PS – I have a secret relationship with my birth mother now.  Her husband and children do not know that I exist, but she will read this blog because she follows my life from the shadows.   So I would like to take this public, yet secret, opportunity to say THANK YOU for not aborting me, and for giving me the right to life, even though it came at a great cost to you.  I love you.
Posted by Janine Maxwell at Wednesday, May 23, 2012